One of the situations an Agile Coach is expected to help with is people transitioning to more lean-agile ways of working. People in roles like project managers, business analysts, middle management and product managers are often highlighted but others can be significantly impacted as well. And even though Agile “transformations” can be all over the map, it’s commonly believed that coaches can help make it go more smoothly.

Also common is to see the Kubler-Ross Change Curve, really the Kubler-Ross Grief Cycle, referenced as the model to use in helping to diagnose the “stage” the person being helped is in and so better assist them through the change. 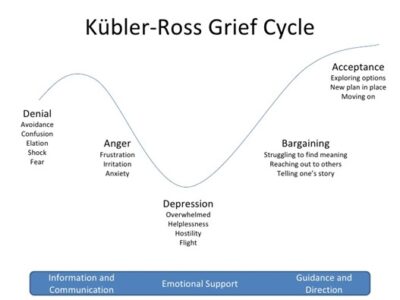 Kubler-Ross developed the model in the 1960’s to propose and explain the five stages of grief a terminally ill patient would go through when informed of their illness. She went on from there to propose that this model could be applied to any dramatic change situation in life. The model became a staple of the change management community and business consulting and has been with us ever since.

But let’s step back and reflect for a moment. Does anything seem at all odd here? Not apples and apples? We’re talking about helping people transform to new ways of working that are grounded in customer satisfaction and productivity, through, among other things, empowered competence. And we are talking about achieving acceptance of this approach by using a model framed around helping someone who has been told they are terminally ill.

That’s a stark juxtaposition though and a little too coarse grained to work with. A smoothed-out version might be stated like this:

The Kubler-Ross curve describes the emotional curve that people experience when confronted with an inevitable change that they cannot overcome and must learn to live with.

Is that what Agile Coaches are supposed help do?

I don’t really think so.

“Ah,” you say, “Typical denial. You’re right there on the curve.”

Perhaps. But it remains that not only are those leery of lean-agile change not all dying soon, but they have one thing that, seemingly, people in the Kubler-Ross curve do not.

They do not at all have to accept this change. They can of course depart, but there are also many more nuanced options. They fundamentally have the right, and really the duty to themselves and to others, to look this change over for themselves, to be informed about it, and to conclude about it. Is it good for the company? Is it a good change being poorly executed? What are the characteristics about this change that are problematic for me and why is that so? Is there a way that can be changed? Is there a way I could try to improve it? What is my contribution to this situation?

And so on. Always with the person being helped to observe, to decide and be themselves ultimately at cause over what actions to take and what path to pursue.

This viewpoint translates over to the change creator side as well. You enlighten, lead, and invite participation.

Perhaps the Kubler-Ross curve fits the “transitional change” model as we’ve come to distinguish it. “It’s happening. How do we get people to accept it?”

In many cases we can do far better than acceptance. In some cases, for the sake of ourselves, our organizations, and our society we badly need to start doing so. Let’s intend toward better ways of working that enhance our collective survival.

[We cover this alternative way of coaching change in detail in our ICAgile Agile Certified Coaching workshop. Check us out at www.clearsystemsllc.com/training. ]