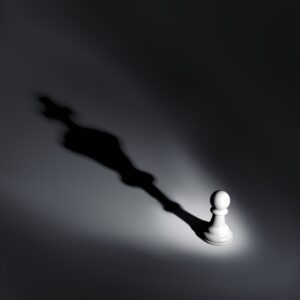 We talk a lot about the collective power of the group.  The whole is greater than the parts.  Believe in the ability of the team.  These are great principles.  And yet I have always sensed they were somehow incomplete, not the exact story.

I can only say this in retrospect, after a recent moment of clarity.  It happened while I was sitting in on one of Marsha Acker’s virtual book tour events for her new book, The Art and Science of Facilitation. She and the astonishing panel she’d assembled[1] had begun talking about achieving a level of co-creation; and the missing piece fell in place.

For me, that missing piece, the underlying truth, is that a great facilitator, leader, human, starts first with belief in the individual; that one person and the fountain of creative potential they possess.  Belief in people really means belief in many individuals and, as individuals, their ability to co-create.  It is each individual rising above himself to create with others who are also creating.  As the panel said, this is not “mere” collaboration.  It is not just more, but different.  It is each reaching fully and their ideas co-mingling with others who are doing the same.

The orchestra analogy is apt.  This viewpoint and approach, pushed out to its boundary, promoted out as a model of leadership and working, establishes a new North Star not just for individual leaders but for human society. “Here is what I am tremendously interested in.  Are you interested in it too?  Let’s go together.”  There is an idea, but it can be fully co-owned.

So we’re not really honoring “the group.”  We’re believing in something much more powerful.  The ability of individuals to co-create.  It is no small skill.  It is, I believe, the skill, the one that will elevate us to the society we are capable of becoming together.